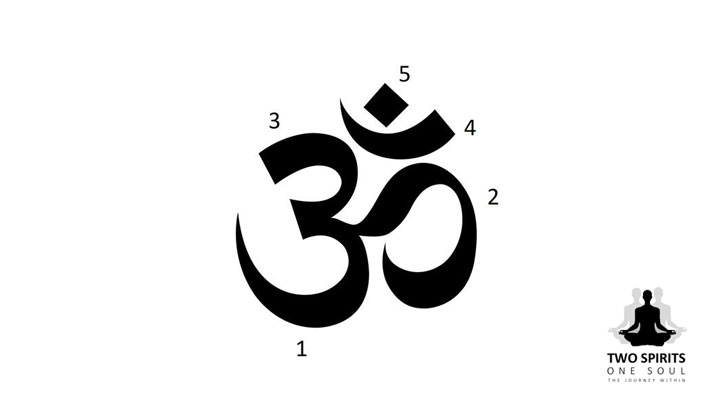 ‘Om’, ‘Ohm’ or ‘Aum’ is a sacred symbol that is known generally as the sound of all creation. According to the Mandukya Upanishad, “Om is the one eternal syllable of which all that exists is but the development. The past, the present, and the future are all included in this one sound, and all that exists beyond the three forms of time is also implied in it.”

The Sound of Om

The sound ‘Om’ vibrates at 432 Hz in contrast to the 440 Hz frequency found in modern music. We can consider 432 Hz to be the musical pitch of the Universe.

The Om sound is a short, ‘seed’ mantra. Seed mantras are not ordinary words with dictionary definitions instead, the mantras convey vibrational content. We can use them to hold, resonate, and propel Kundalini energy. There are eight primordial shakti seed syllables, including Om. Om is associated with the third eye and crown chakras. Other syllables are connected to each of the other chakras. Try chanting these as you focus on each chakra:

Om can also be expressed as ‘Aum’, an articulation of three phonetic parts, a theme which aligns with many spiritual traditions built around a holy trinity. Each of the three letters, and sounds, corresponds to a different aspect of divinity. The first, A, invokes Brahma, the creative. The U sound invokes Vishnu, the preserver. And the M sound, Shiva, represents destruction.
The Meaning of the Om Symbol

The Om symbol represents the sound in visual form: a mix of curves, a crescent and a dot. According to Indian dharmas, the symbol for Om is formed from 5 distinct concepts: the Waking State, the Dream State, the Deep Sleep, the Maya or the Illusion, and the Samadhi or the Absolute State.

The bottom curve represents the waking state of the conscious mind, the vaishvanara or jagrat that looks outwards using the five senses to experience the world. It is A: creativity or Brahma.
The middle curve is the dream state or tajisa that is the bridge between the deep sleep and waking state where consciousness channels experience inward. It is the U in ‘a-u-m:’ preservation or Vishnu.
The upper curve is the deep sleep which is man’s latent unconscious condition where no dreams and desires exist and the sleeper is subconsciously shut down. It is shushupti, or the M in “a-u-m:” destruction or Shiva.
The crescent shape above the curves depicts Maya which is the obstacle that sits in the way of spiritual development. Maya is the illusions that separate us from the absolute state.
The dot at the top of the symbol represents Samadhi which simply translates to ‘bliss.’ This is believed to be the state in which someone could truly connect with the Divine. It is the silence that after “a-u-m:” the absolute state where consciousness faces neither inwards or outwards but exists in quiet awareness.

The History of the Om Symbol

Om is recorded in many ancient texts, prayers and ceremonies. We first find Om recorded in the Vedic Hymns. These hymns imparted meditation techniques and spiritual knowledge. Mythology avows that the scripture was vibrated into existence by spoken voice. Om was further explored in the Upanishads, particularly the Mandukya Upishad, which is a sacred text devoted to Om. These texts and other Upanishads in the Vedanta (later vedas) were foundational in Hinduism and Buddhism.

Many historians agree that the depiction of the Hindu God Ganesha embodies the themes of Om. Ganesha’s physical form is said to be an expression of Om. With the upper curve being the head, the Lower curve his belly, and the twisted curve to the right being the trunk. Ganesha’s service is to support one in removing obstacles which is adjacent to the concept of Maya and Samadhi. 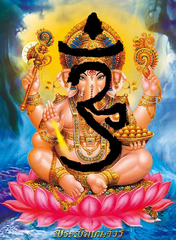 There is even evidence that the Christian “Amen” and Islamic “Amin” are both derived from Om. Paramahansa Yogananda, author of the Autobiography of a Yogi concludes: “Om or Aum of the Vedas became the sacred word Hum of the Tibetans, Amin of the Moslems, and Amen of the Egyptians, Greeks, Romans, Jews, and Christians.” Cultures around the world have strikingly similar concepts on the power of vibration. To illustrate, in Revelation of the Bible the word Amen is connected to the beginning of the creation of the Universe: “These things saith the Amen, the faithful and true witness, the beginning of the creation of God.”

Both the Om symbol and the Om chant are frequently used around the world today. Yogis commonly chant Om particularly in meditative practice. The spoken repetition of Om is said to slow breathing and relax the body. The vibrations sooth our organs and nervous system and can even strengthen the spine. The Yoga Sutras of Patanjali defined the 8 Limbs of Yoga. The sixth of these, Dharana guides the practitioner to single-focused attention by repeating a mantra, most commonly Om to achieve union with the divine. Also, Om can be proceed further mantras. The six-symbol Sanskrit mantra, “Om mani padme hum(Hail, jewel in the lotus)” is the mantra of those who have achieved Buddhahood.