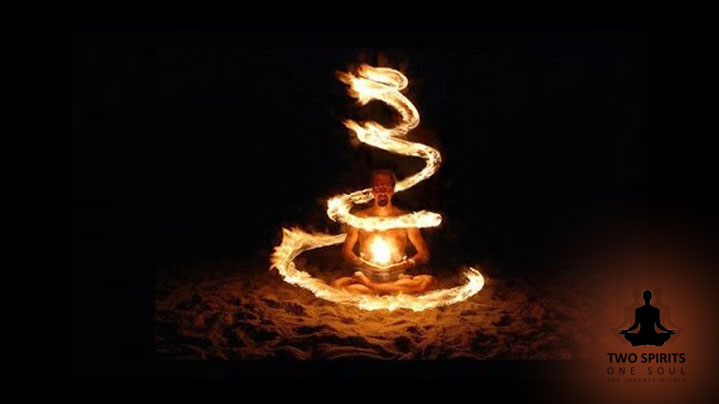 The difference between kundalini and spiritual awakening is that Kundalini is a powerful phenomena occurring in Conciousness but Spiritual Awakening is Conciousness waking up to Itself as its true Identity.

Kundalin Symbol that has become a medical symbol as The Caduceus. This symbol is derived from ancient Egyptian and Greek symbols for the risen and awakened kundalini.

Kundalini is nearly always involved in a spiritual awakening. but it is not necessary for kundalini to rise to be spiritually awake.

Spiritual awakening is waking up from identification with form and the ‘little me’ I had supposed was my identity which with awakening is seen through and eventually discarded as part of the dream state and unconscious world.

As the ego identity begins to fall away so too does much of the suffering created by an egoic sense of self and this is replaced by a background of peace as well as changing states of bliss and happiness. I say changing states because the Awareness itself is pure peace but does give rise to blissful states in the human form. However strong feelings like anger may still arise from time to time but do not have any sticky quality and are simply seen and observed as they pass.

What I am describing here is awakening at the level of mind which some call the no-self state. From initial awakening out of the form identity it usually takes time for the egoic self to fall away more and more. Rather like chunks of ice breaking off from a melting iceberg. People find that egoic driven interests and activities loose there interest and appeal and simply being is fulfilling enough. The searching for happiness or anything else in the world is no longer there as one is simply self fulfilled.

There is too an awakening of the heart and this can result in a great heart opening and a sense of blissful love and joy which can last for moments or months as part of the spiritual honeymoon. It also orientates one towards being of service and benefit to the whole.

There are other types of awakenings most of which are not permanent but act as sign posts or pointers along the way. Things like visions, insights and psychic phenomena,psychic and healing abilities as spiritual gifts. Some mistake these for the goal but they are not truly the goal of the spiritual path and to get caught there can delay the full spiritual blossoming of conciousness in the truth of what you really are.

Kundalini as life force energy lies dormant and curled 3 1/2 times as the base of the spine in everyone. it can become active at any time through various influences but an active kundalini is not the same as awakening. If Kundalini prematurely awakens,or becomes active in someone who is not prepared through spiritual practice and disciplines, it can create havoc and all kinds of unwanted effects, so kundalini alone will not necessarily move one towards spiritual awakening or eventual enlightenment. If someone is prepared through at least mindfulness based practice and are able to maintain a level of inner quiet or stillness then Kundalini most often is awkened and involved and helpful in awakenings. As it rises through the central channel and through each chakra to the crown it can be instrumental in taking one to full and true Enlightenment.

Once kundalini has touched the Ajna chakra at the front of the brain it is a permanent awakened kundalini and there will be no regression.

It has to be said a tiny minority of people have seemingly had full awakenings and kundalini rising with no apparent previous spiritual orientation or practice. In these cases it seems to me more than likely they have prepared in previous lives through meditation and other practices.

So Spiritual awakening,that is the awakening of consciousness in human form, can take place without Kundalini Rising but more often does involve Kundalini.

Kundalini rising is a great help and wonderful for those who are spiritually prepared but still can be challenging, it can be very challenging indeed to those who are not spiritually mature or prepared hence the warnings about using certain practices or even some types of drugs such as LSD that may awaken kundalini prematurely.

So the difference between kundalini and spiritual awakening is that Kundalini is a powerful phenomena occurring in Conciousness but Spiritual Awakening is Conciousness waking up to Itself as its true Identity.